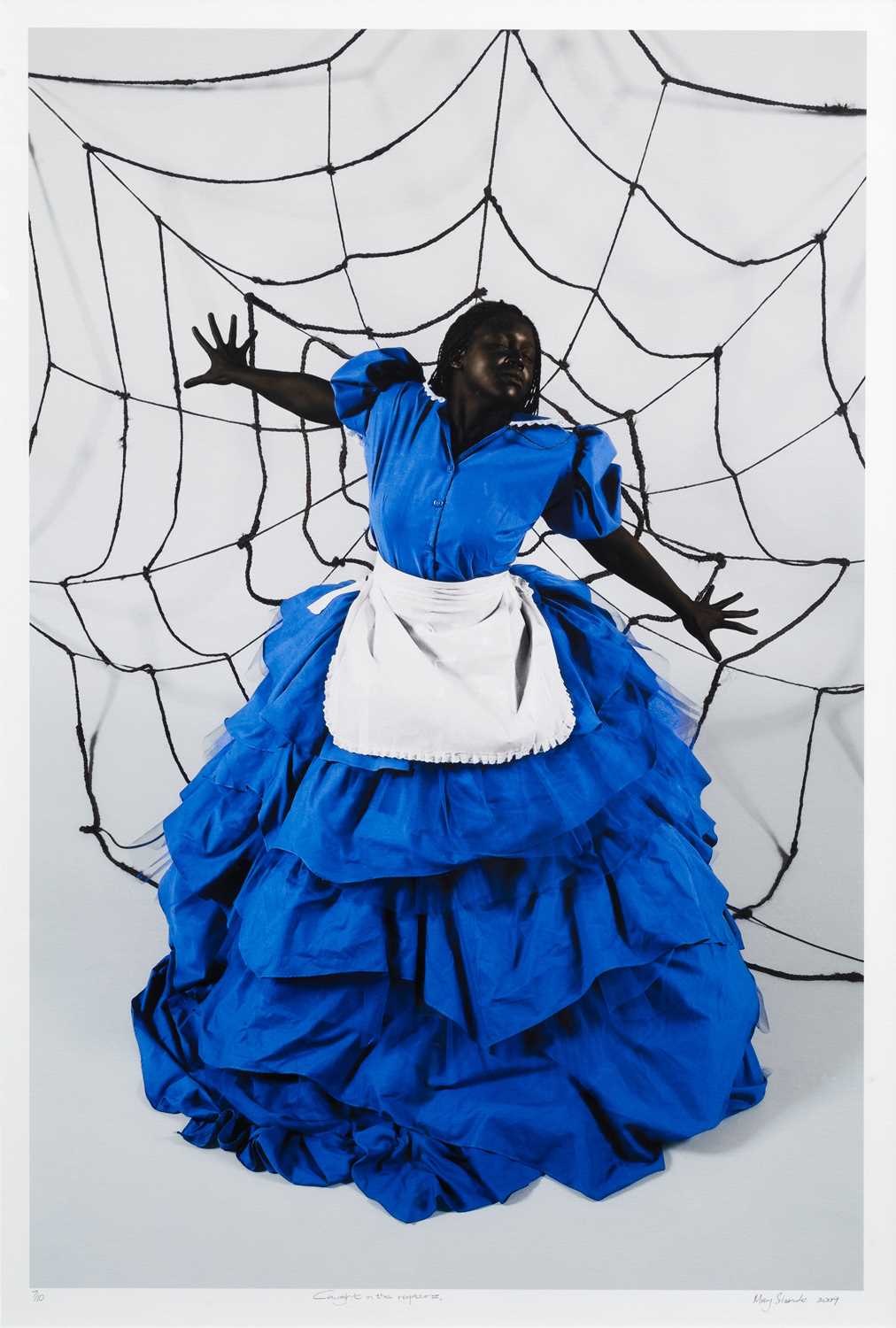 Not examined out of frame. Full report available on request.

In this powerful image, Mary Sibande references the Greek mythological tale of the mortal Arachne, the daughter of Idmon of Colophon in Lydia, who challenged Athena, goddess of war, wisdom and crafts to a weaving contest. Athena wove a tapestry depicting the gods in majesty, while Arachne showed their amorous adventures. Enraged by the perfection of her rival’s work, Athena destroyed it. In shame and despair Arachne hanged herself, but the goddess, in an act of solicitude, loosened the rope, which transformed into a cobweb and Archne herself was changed into a spider.

Here, Sibande’s alter-ego Sophie, is depicted wearing her signature extravagant vivid royal blue Victorian-like maid’s uniform, standing Arachne-like before a human size spider’s web. Motivated by her personal biography, Sibande mines her family history as a starting point for her work, explaining that Sophie acts as the protagonist in her dramatic visual narratives.

Confronting the contradictions that ‘her story’ represents, Sibande states: “I am looking at history. I want to distort it, to turn it upside down. I want to question it. I want to punch it. I want to love it […] The work borrows from history. And it borrows from my stories, from my being. And, of course, for me to look at me, I have to look back at my geography – who’s surrounding me and look at my race. Who am I: a black woman in South Africa post-apartheid.

Sophie is me. Sophie is the women in my family who were all maids, from my great-grandmother to my mother. And I felt the need to celebrate these women because they were limited as black bodies, as black female bodies.”[1]

Forming part of Sibande’s critically acclaimed Long Live the Dead Queen series, Caught in the Rapture sees Sophie, in a fervent gesture, emancipating herself from a ghoulish reality in which she feels captured. It serves as critique of stereotypical depictions and contextualisation of (disempowered) black women, of identity construction and power relations.

In 2021, the photograph was featured in Vogue Italia’s Reframing History /12 Chapters alongside other acclaimed, contemporary Black artists such as Trevor Stuurman and Campbell Addy.