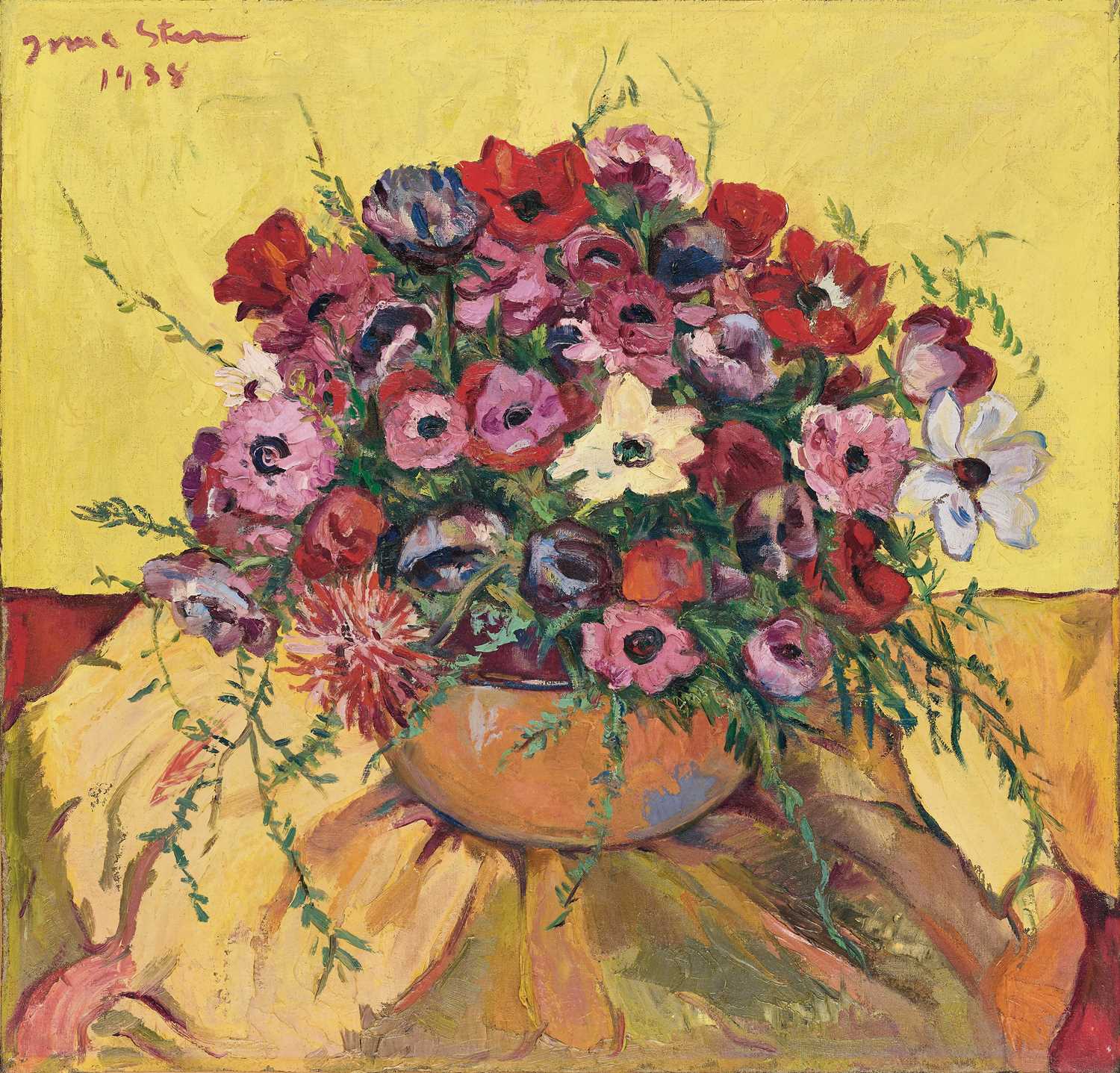 
The overall condition is very good.

The work has been restored previously.

Donated by the artist to raise war funds. The first owner won the work in the raffle, thence by descent.

The owner of this enchanting flowerpiece won it on a raffle organized to raise war funds. Stern, who gave family and friends her works with some reluctance, was generous in this donation.[1]

Irma Stern’s garden at her home ‘The Firs’ in Rosebank, Cape Town was an important and tranquil sanctuary to the artist. She worked tirelessly planning and creating the lush exterior, bursting with colour and abounding with blooming flowers year-round. The same exuberance was mirrored in the interior of her home, where walls were often painted in magnificent, yet unconventional colours and the artist’s substantial collection of African sculptures, prayer mats, antique vessels and oriental and medieval objects was on display.

While many of Stern’s paintings were derived from her extensive travels, her home was important and her vivid still-life studies ­– largely constructed from objects and flowers in her private space – occupy a substantial place within the artist’s oeuvre. Flower pieces, in particular, attests to her love of her garden and show something of the way she lived, surrounded by beauty, colour and flowers. Indeed, this wonderful painting of anemones embodies much of the artist’s exuberant and bold character.

The floral arrangement, occupying almost the entire picture plane, is bursting with radiant hues. The warm pink, red and purple tints of the flowers and complementary greens of the untidy foliage are offset by the brilliant yellow of the draped cloth below and the wall behind. The painting is undoubtedly an assertive celebration of colour and painterly texture.

The work also points to other aspects of Stern’s private life. The artist kindly donated Anenomes (1938) to a raffle organised to raise war funds. While Marion Arnold, author of Irma Stern: A Feast for the Eye, points out that Stern gave works to family and friends with some reluctance, she did in fact support the war and other efforts willingly. In Remembering Irma, Mona Berman confirms that Stern would donate works to the war effort whenever given the opportunity or called on.[2] Later, in 1958, the artist also donated a work to the Treason Trail Defense Fund when Freda Feldman (Richard Feldman’s wife and Stern’s friend) asked her to assist.[3]

What is clear is that Stern did support critical causes. As a German-Jew who spent much of her formative years living in Germany and who, in the 1930s, still had family there, Stern would have been acutely aware of the horrific anti-Semitism in the country. She had expressed her fear in a letter to her friend Trude Bosse in 1933, “I get terribly frightened when I think of Germany’s future – so much hatred that has to be overcome".[4] Five years later in 1938, the year Anemones was painted, Stern’s concern for the Jewish community is evidenced in a letter to her friends the Feldmans. “Today mother and I went out to Lady Phillip’s farm in Somerset West to try and arrange some important matter for the Austrian and German Jews”. J.B.M Herzog and Jan Smut’s United Party government had, in 1937, introduced the Aliens Bill which prevented further German-Jewish immigration into South Africa. Stern continued, “Shall let you know if anything comes out of it – would be most important”.[5]

After 1938, growing anti-Semitism and the Second World War prevented Stern from travelling to Europe until 1947. This magnificent flower piece was painted at a moment when Stern’s life was about to shift dramatically. It is vibrant and rich in colour and offers a window to the artist’s exuberant personality and private life at ‘The Firs’. But, its history also points to an important story of the artist’s inner world and her worries and concerns within turbulent and troubling times.