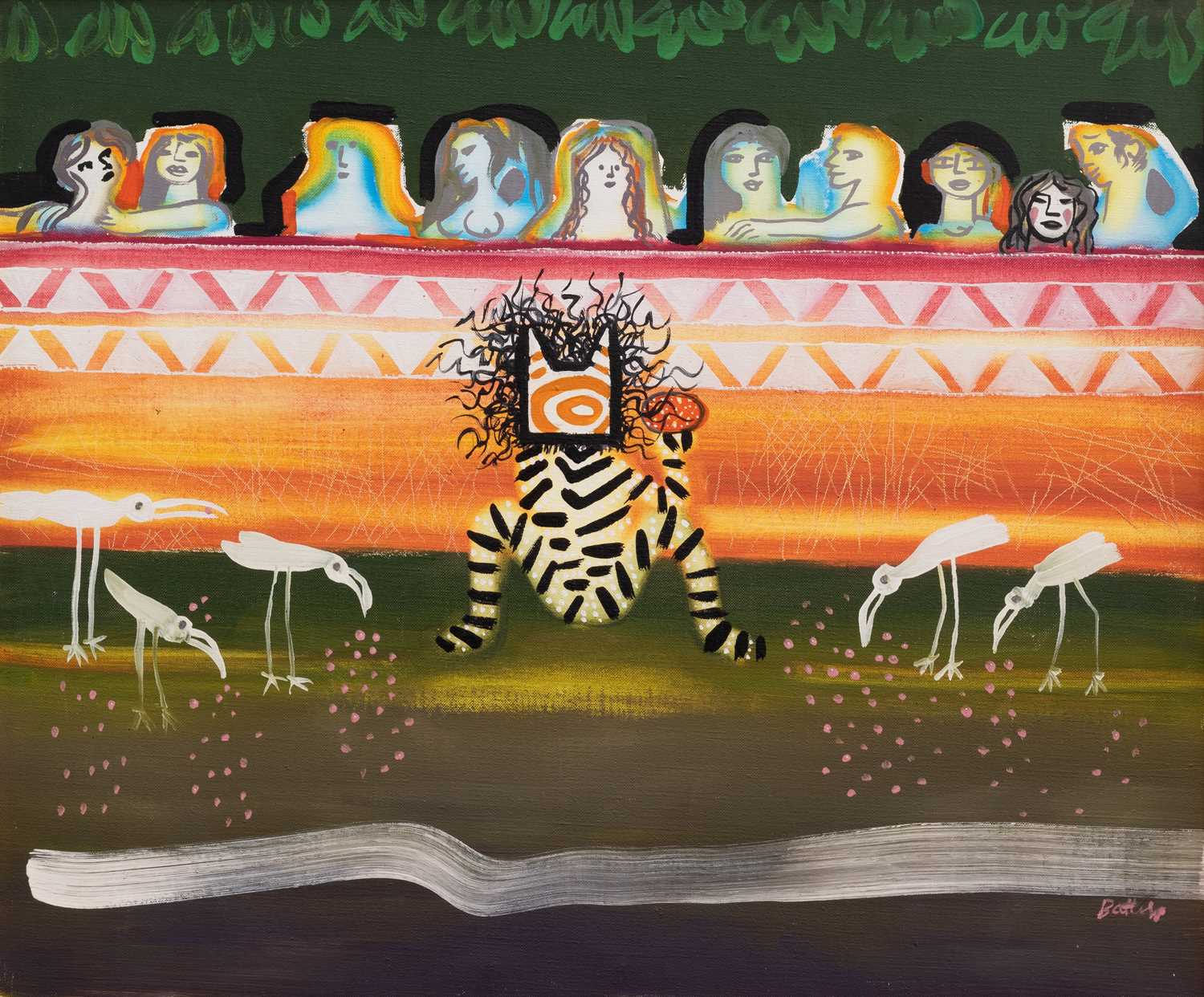 In Last Supper, alternatively titled African Wall, Walter Battiss depicts, in his own exuberant and playful way, the scene of the Last Supper. Traditionally, a dramatic and psychologically complex moment portraying the last supper Jesus had with the 12 apostles, and specifically the moment after he announced that one of his apostles would betray him.

Most often associated with Leonardo da Vinci’s famous mural painting at the Santa Maria delle Grazie in Milan, depictions of The Last Supper in Christian art in fact date back to early Christianity and can be seen in the Catacombs of Rome.

In modern times, countless artists have studied, referenced and reinterpreted The Last Supper in ways that communicate a myriad of attitudes towards religion, art and society. In 1955, surrealist Salvador Dalí painted The Sacrament of the Last Supper, in 1972 feminist Mary Beth Edelson appropriated Da Vinci’s work by collaging the heads of notable women artists over the apostles in Some Living American Women Artists / Last Supper and pop-artist Andy Warhol used The Last Supper to create his last and largest series of paintings from 1986–87. More recently, in 2013, postcolonial contemporary artist Yinka Shonibare drew on Da Vinci’s work in Last Supper (after Leonardo) and The Last Supper Exploded.

Battiss is certainly in good company when delving into this centuries old subject. But what set him apart from many of his contemporaries in South Africa, is that his art was deeply rooted in Africa and he combines the western Christian image with his personal distinctive visual language to create a vibrant and unique work.

Well-known for his study of San rock art, Battiss often directly referenced their imagery. But the artistic practices he studied also acted as a catalyst for pictorial elements such as a two dimensional approach, use of flat surfaces and colour and erasure of detail – which he came to use widely and are masterfully employed in Last Supper.

At the very center of the composition, a bizarre figure, half zebra, half man – and quite possibly inspired by San imagery – appears to feed five long-legged white birds. Behind him only 9 figures (not the normal 13, 12 apostles and Jesus) are seated at a table as Battiss depicts his own assortment of simplified flat imagery of animals, animal-like figures, men and women – one an even a slightly daring nude – in this fantastical, and playful painting.