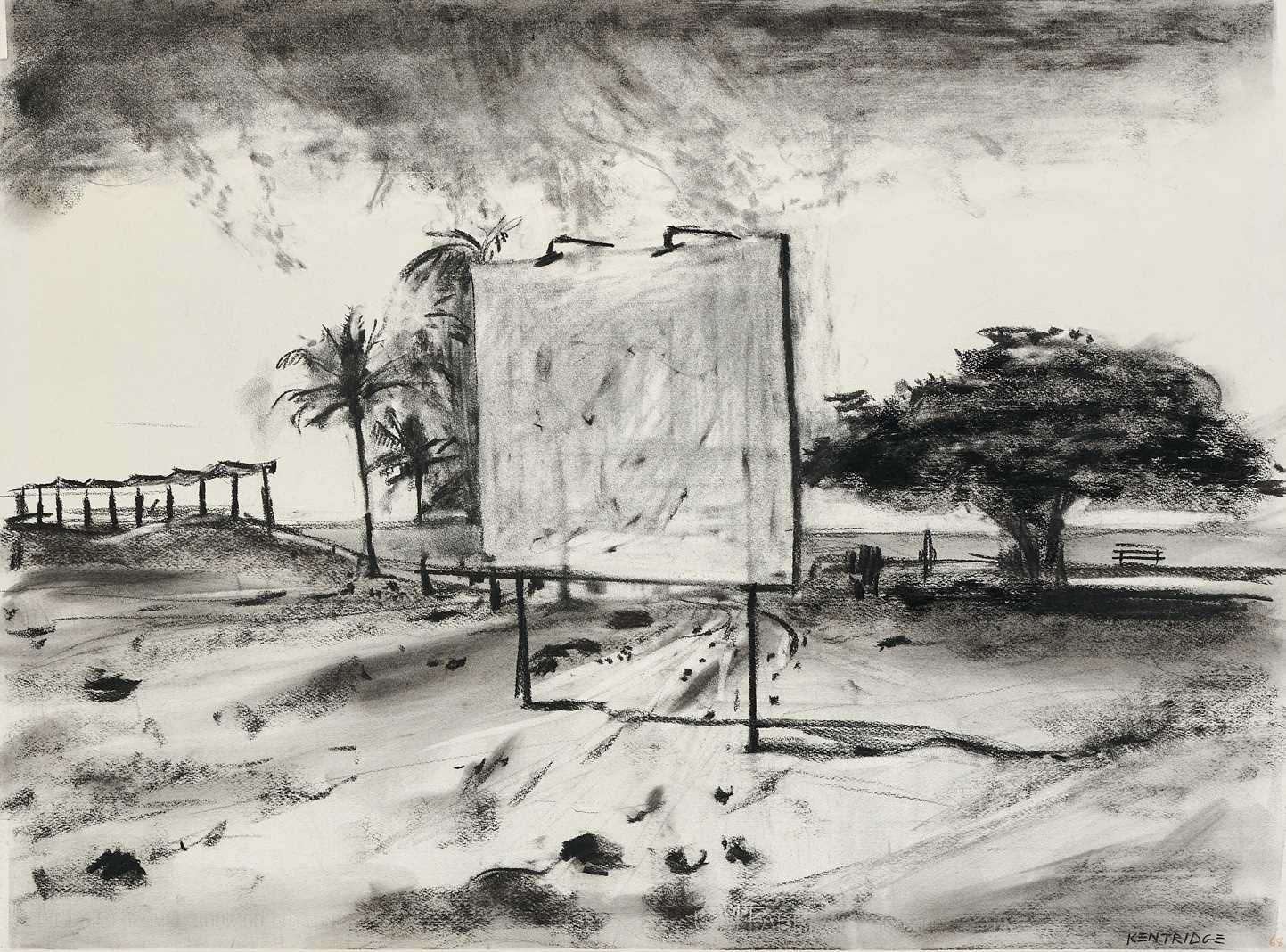 Internationally regarded for his intellectually expressive work in a variety of graphic mediums, film and sculpture, William Kentridge continues to garner critical acclaim for his many creatively ambitious artistic projects.

This arresting charcoal drawing depicts a solemn landscape, seemingly a desolate park, featuring – almost out of place – another depiction of the infamous ‘billboard’ image, a notable recurring ‘Kentridge motif’ as seen in many of his drawings and films – like in the opening scene of the animation film Johannesburg, Second Greatest City after Paris (1989) and most notably in Other Faces (2011) for example. This motif is not only a literal reference to the industrial structures of the Johannesburg landscape, but uniquely used by the artist as a conceptual and symbolical metaphor, or to integrate additional projections within the drawings for his animated films.

In the late 1980s Kentridge started a project of driving into the countryside and drawing whatever landmark presented itself; be it fragments of billboards, pylons, stadiums, barbed wire fences etc. The resulting charcoal drawings formed part of a larger body of drawings Kentridge produced in 1988. That same year, he gave a lecture titled Landscape in a State of Siege, in which he spoke of his desire to avoid "the plague of the picturesque". Kentridge’s charcoal sketches are intended to counter the romanticised depictions of the South African landscape, as he believes these sentimental views were deliberate acts of dis-remembering: "I had not seen, and in many ways feel I have not yet seen, a picture that corresponds to what the South African landscape feels like. I suppose my understanding of the countryside is essentially an urban one. It has to do with visions from the roadside, with landscape that is articulated, or given a meaning by incidents across it, pieces of civil engineering, the lines of pipes, culverts, fences"[1].

This drawing is reminiscent of the central barren landscape scene in the film Felix in Exile, produced in 1994, and might have been a precursor to the drawing created for the animation.

Here, the scene is almost dreamlike – open ended. What has been projected, or what is to be projected? The landscape itself is the central character, with a life of its own. In his work, Kentridge is interested in the evolution of the physical environment as a result of human behaviour; landscapes are always in a state of transformation, acquiring new meanings with each event and occurrence.

Of his landscape drawings during this time, Kentridge states: “I started calling myself an artist in my thirties when I discovered not just the necessity but the pleasure of drawing the landscape just to the south of Johannesburg. And also when I discovered the pleasure of a soft chamois leather dipped into charcoal dust and wiped across the white surface of the paper, leaving not just a train of dark charcoal grit on the paper but also of a darkening sky above a light horizon.