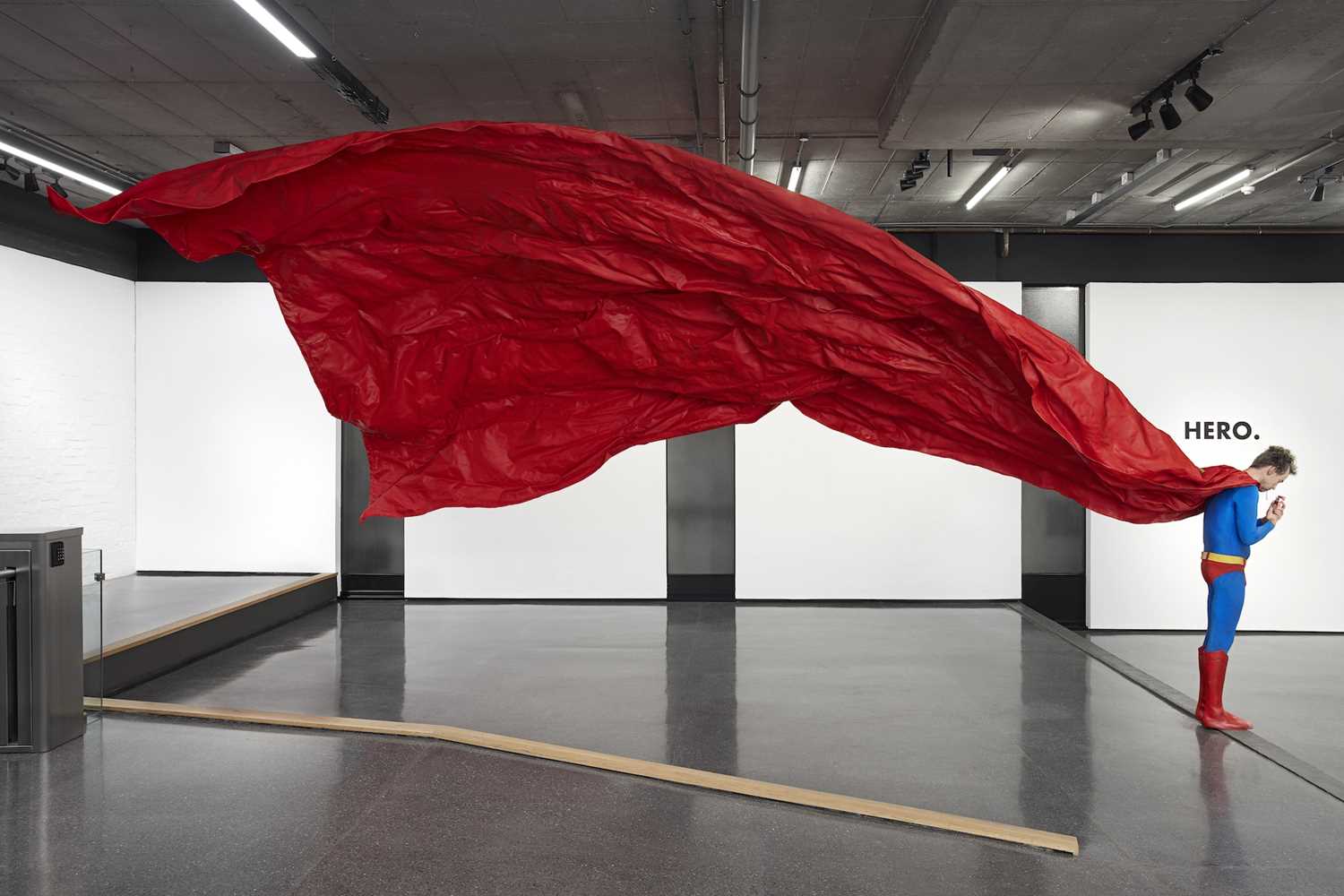 Acquired directly from the artist.

At first glance, this spectacularly mundane conjuring of an apex superhero on a smoke break might seem like a blunt, iconoclastic joke. It is that. And it is also much more than that. The flesh may be weary, but the concept is taut, with multiple meanings resonating and refracting off one another in a goosebump-inducing game of existential hide and seek.

If reification is “to represent something abstract as a material or concrete thing,”[1] then this hyperreal autosculpture of/by Ed Young could be understood as doing the opposite kind of work – unmaking the impervious, almighty, hero status of white masculinity invested in the extraordinary superpersonhood of Superman. It calls to mind both Young’s ecstatic sculpture Arch (2010), depicting the late Archbishop Desmond Tutu swooping into a room on a set of chandeliers, purple tunic blowing in the wind, and Mary Sibande’s sculptures in which she riffs on the Superman trope and summonses the heroic power of Black womanhood to overcome legacies of oppression. On the contrary, there is nothing triumphant here. This dude is no ripped-and-ready, franchise-spawning superhero with the power to fight crime and melt steel with his penetrating X-ray vision. Instead, he appears to be the very personification of Young’s public commitment to the cult of the antihero or the loser – a willed subversion of capitalist performance. Mildly dejected, he stands on the edge of a precipice, hunched over a pack of Marlboro cigarettes, about to light up.

But the longer you look and the closer up you get, the more mesmerising the work becomes. Such perfect imperfection. Recalling philosopher Jean Baudrillard’s meditations on hyperrealism in Simulacra and Simulation (1981/1994)[2], the work induces a strange sense of being stuck in a recursive loop trying to figure out what is life and what is art. Young has sculpted his own equivalence. He has simulated himself so exactly as to displace himself. As you gaze at the astonishingly fine reproduction of the very texture of his skin – its folds, creases, pores, hair follicles – an uncanny sense of the absence of the actual, breathing Ed Young begins to arise. The sculpture takes on the quietly shocking poignance of a memento mori, an effect amplified by the life-and-death precariousness of the depicted act of smoking a cigarette.

And then there is the drama of the red cape in all its dazzling splendour. The technical adeptness in forging such immaculate verisimilitude in the rendition of the crushed cloth in full flight calls to mind the carving of the white and blue Carrara marble in the draped garments of Michelangelo’s Pietà (1499). It is awe-inspiring. And yet, this was supposed to be a work that deflates the myth of the extraordinary. So here’s the joke within the joke. Not so ordinary after all then, mate. Not such a quick one liner.