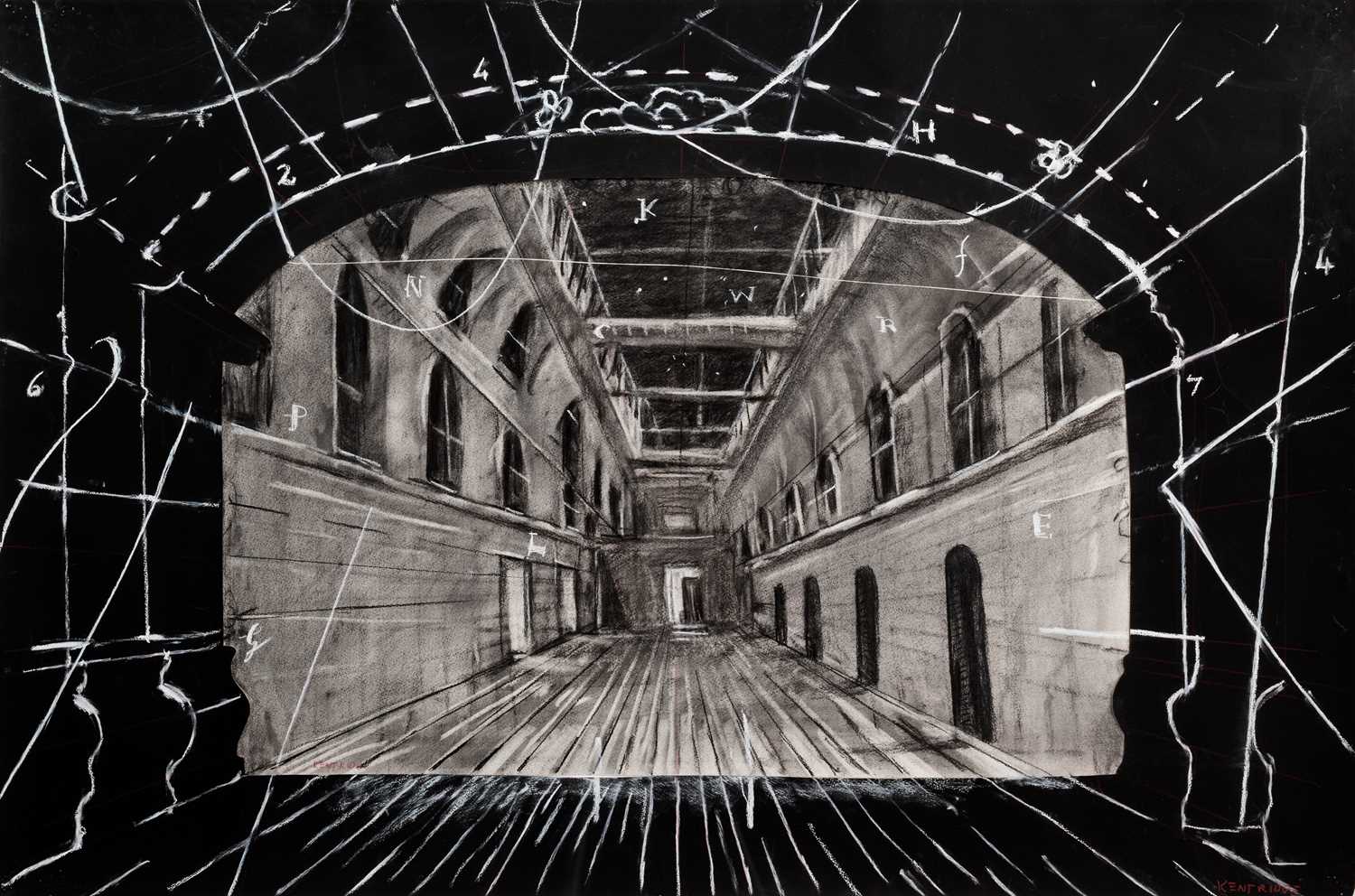 charcoal and pastel on collaged paper

Not examined out of frame.

charcoal and pastel on collaged paper

This impressive drawing of a stage provided William Kentridge with an arena in which to think through Mozart’s The Magic Flute and to explore the magic of the opera which in his opinion resides in “how complex and deep questions can be played out with such a light hand, and in the music, which simply floats to our ears, but which has such a gravitas to it at the same time”.[1]

The Magic Flute was the first large-scale opera directed by William Kentridge. While he has since directed several other operas, The Magic Flute remains key. According to the artist, “it is the opera about opera, about the power of music in the service of love”.[2]

In 1998, the Théâtre Royal de la Monnaie in Brussels commissioned Kentridge to direct The Magic Flute, Mozart’s last opera and one that has seen many interpretations since it was first performed in 1791. After its Brussels premiere in April 2005, the opera travelled to Lille, Caen, Naples, Tel Aviv, New York, back to Brussels, then on to Cape Town before ending in the director’s home city, Johannesburg.

The larger project embraces the following bodies of work:

Kentridge’s conceptualisation of the project involved constructing a mini-stage, moving objects about, setting up a camera and testing projections against different backdrops. The constructed stage is the first arena of experimentation, of testing ideas and exploring lighting angles and their impact on action. The stage becomes a space of imagination in which the artist can explore, and test, the full range of possibilities from which his production can develop. The black box, in effect, is the tabula rasa in which the artist’s imagination is free to experiment and create.

Kentridge’s interpretation of this much-loved comedy, The Magic Flute, has provided audiences with unlimited delight and given rise to one of his most sought-after bodies of drawings and prints. This dramatic stage setting allowed the artist to envision and create a range of images and sensations from the joyous swirling of birds to the darker imagery of skulls. As he has pointed out, “the opera is filled with questions of authority, tyranny, benevolence, with assumptions of knowledge – in other words, questions that are still central to politics today”.[3]

[1] For a compelling in-depth account by the artist on the making of this opera, see http://www.kentridge.studio/the-magic-flute-directors-note/ Also see Law-Viljoen, B. (2007). William Kentridge: Flute. Parkwood: David Krut Publishing.