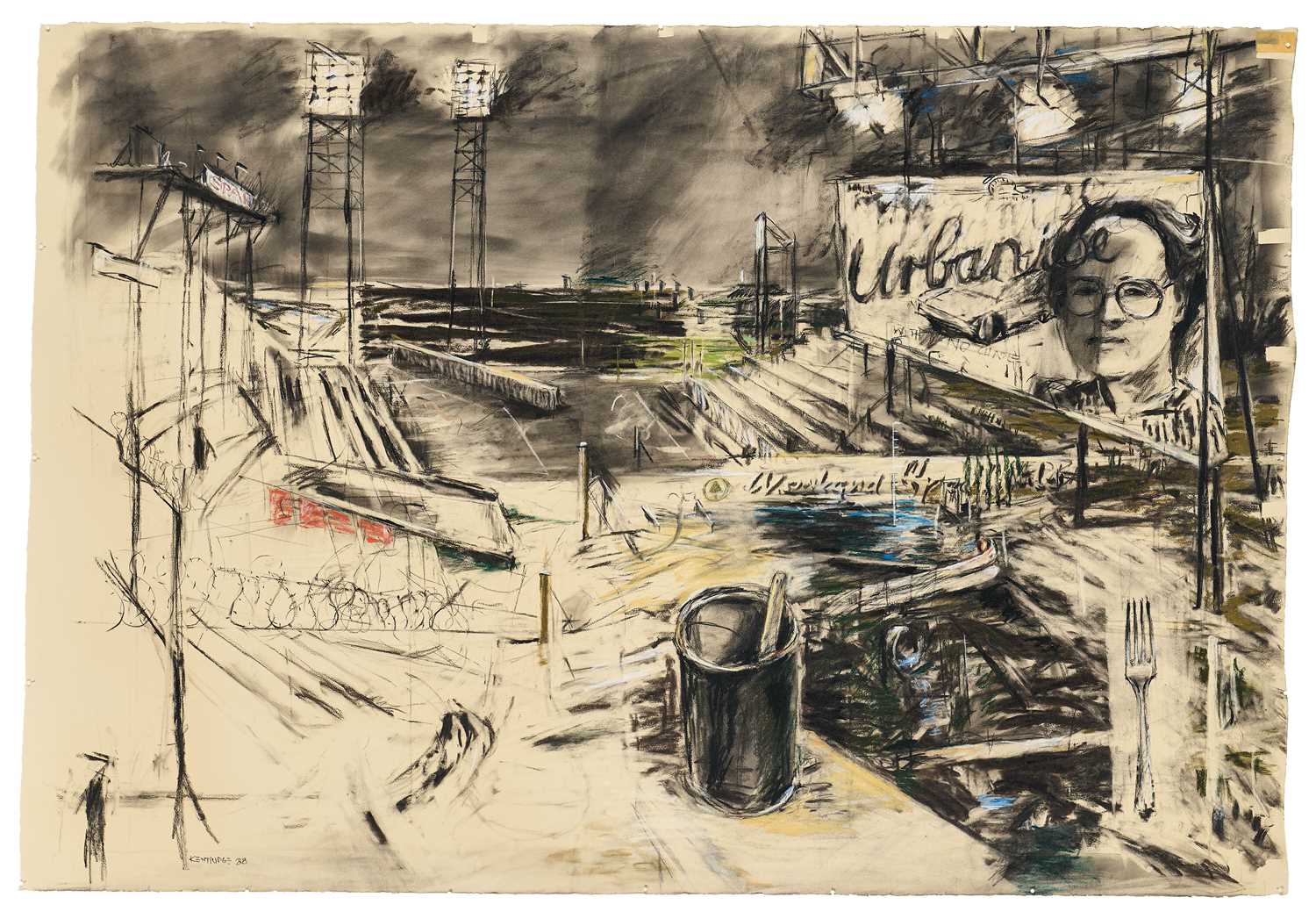 Although not mentioned by name, the mixed media drawing Urbanise is one of the landscapes discussed by Kentridge in his article ‘Landscape in a State of Siege’ that was published in Stet magazine in November 1988.[1] In the article, Kentridge explained how neither the image of Africa that he was exposed to at school, nor the conventions of European landscape painting that formed an important part of his aesthetic education, corresponded to his experience of his environment as he was growing up. In fact, as he wrote, he soon came to recognise that, in their denial of the historical processes of dispossession and appropriation, the heroic landscapes of South African art history are not only false but actually “documents of disremembering”.

Kentridge described his understanding of landscape as “essentially urban”. “It has to do with visions from the roadside, with landscape that is articulated, or given a meaning, by incidents across it, pieces of civil engineering, the lines of pipes, culverts, fences”. In Urbanise and other landscapes in this series, evidently, this catalogue of civil engineering details has developed into fractured peri-urban wastelands of billboards, broken stadia, constructions sites, etc. “It has become clear that the variety of the ephemera of human intervention on the landscape is far greater than anything the land itself has to offer”. By focussing on the human history of landscape, Kentridge uses the genre to resist what he calls the “Disease of Urbanity”, that South African tendency to absorb contradiction and compromise in daily life that, for him, constitutes another form of “disremembering”.

The title Urbanise almost certainly reflects this idea of urbanity – the first two syllables are emphasised in the drawing. But it also suggests the fateful rhetoric of early twentieth-century socialist revolutionaries. In both verbal and visual forms, Kentridge embraces ambiguity and contradiction: the pine tree symbol of ‘Spar’, the suburban grocery chain, for example, is opposed to a short line of poplar trees which, in turn, echo the form of a dining fork in the foreground. And the word ‘Spar’ itself is connected to those ‘stout poles’ that constitute one of its dictionary meanings. This play with words and forms is enabled by Kentridge’s adoption of the collage style, that method of representing one’s environment not as the harmonious unitary space of the South African landscape tradition, but as “a non-stop flow of incomplete, contradictory elements, impulses and sensations”.[2] It is in this disjointed vision of the world that Kentridge is able to depict his wife, Ann Stanwix, sharing a billboard with a motor car advertisement.