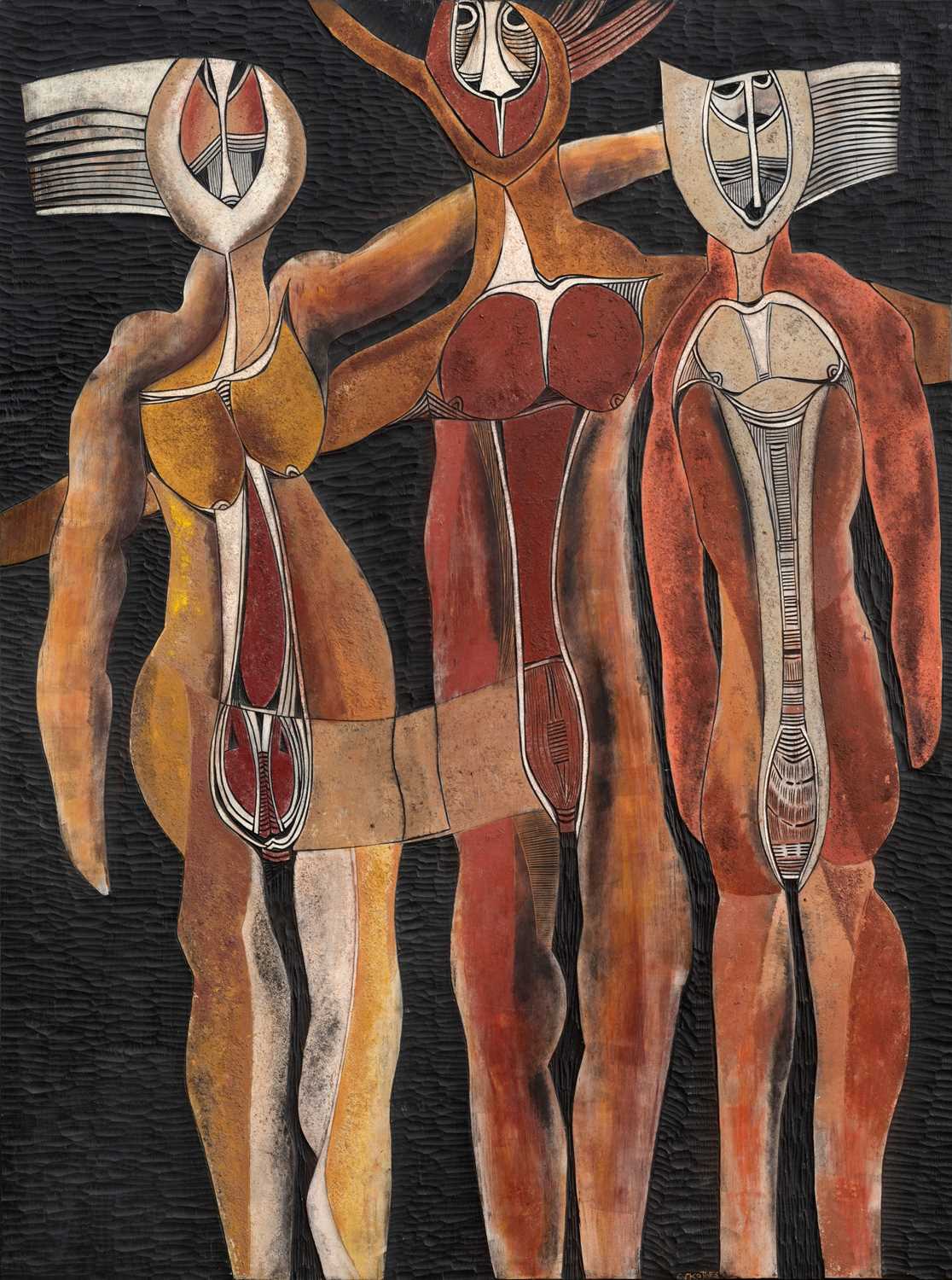 The colours are stable.

Cecil Skotnes was not only one of South Africa’s most outstanding artists but one of its most remarkable citizens. His experiences during the second world war had “initiated a life-long quest for the universal and metaphysical common denominator of humankind’s existence”.[1]

Skotnes was undoubtedly impacted and influenced by fellow artists he met as a teacher and mentor between 1952 and 1965 at the Polly Street Art Centre, “the launching-pad for the first large-scale venture of urban black South Africans into the plastic arts”.[2] His empathy for humanity and his determination to make the world a better place for all, are evidenced not only in his commitment to initiatives like Polly Street, but in the courtesy and care he brought to his everyday dealings with those around him.

In the late 1960s, Skotnes received several significant commissions. The first, consisting of eight panels, each 150 cm high and extending almost fourteen meters, was completed in 1966 for Barclays Bank in Commissioner Street, Johannesburg, and the second, consisting of five panels measuring in total 260 by 610 cm, was completed in 1969 for the Standard Bank Head Office in Johannesburg. Both were titled The People. A third mural, The Citizens, commissioned for the Hyde Park Shopping Centre in the same year measured 2,5 by 35 meters. Created following the incarceration of Nelson Mandela in 1964, when millions of South Africans were subjected to increasingly draconian apartheid laws, racial discrimination and forced removals, the titles of these commissions provide insights into the artist’s thinking and concerns. They are not merely people-oriented, but human-centered works that provide insights into Skotnes’ compassion for his fellow South Africans and his philosophy of life. “Confrontation between good and evil is a major theme”, as Frieda Harmsen pointed out.[3]

Figure Composition follows in 1970. A group of three figures stand upright and proud, facing forward. Together, with their arms intertwined in an embrace, they epitomise the Zulu phrase ‘umuntu ngumuntu ngabantu’, meaning that a person is a person through other people. With its roots in the humanist African philosophy, where the idea of community is one of the building blocks of society, the ubuntu concept of a common humanity and a sense of oneness between peoples is one that would no doubt have been central to the artist’s beliefs and principles.Emma Bedford