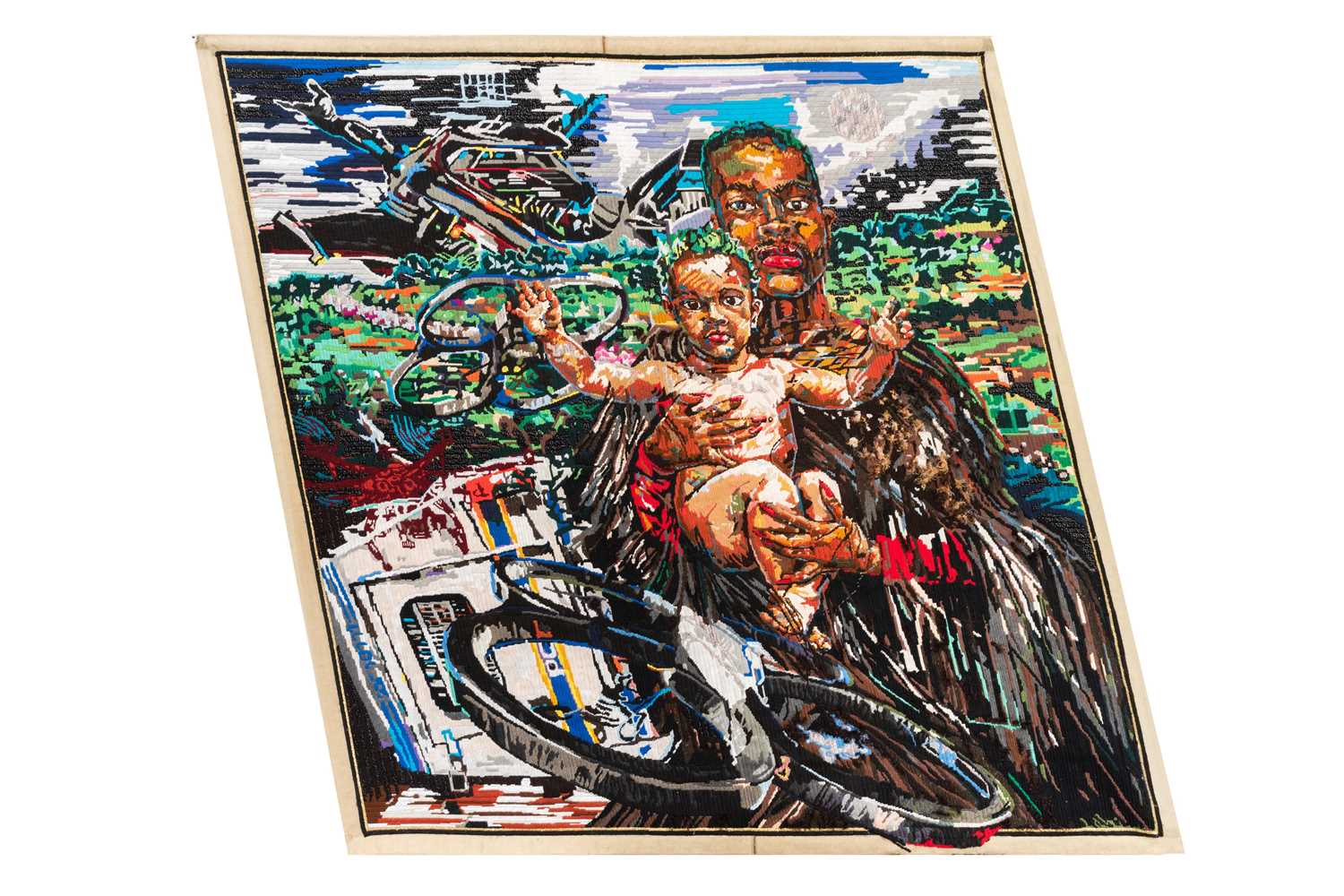 wool and thread on tapestry canvas

There is a sheet of protection fabric sewn to the reverse that is detached from the bottom right corner.

wool and thread on tapestry canvas

In the 1990s, buoyed by a radical constitution engineered by Justice Albie Sachs, MCQP – The Mother City Queer Project – came into being. Its manifesto defined what today we regard as gender fluidity. “Although many Queer people are homosexual, not all homosexuals are Queer. Not all heterosexuals un-Queer. In fact, some straight people are Queerer than some gay people. Queerness is not a cut-and-dried definition … Queerness is an attitude.”[1]

A generation later, Athi-Patra Ruga would arrive on the South African, now global, art scene, bearing a name that evoked Asian mysticism and African mischief. Because what can never be ignored when looking at a Ruga work, is its playfulness, its irresistible drive to spoof convention, revoke authority, skew what we think of as commonplace or normative. He is Shakespeare’s archetypal court jester, the trickster who speaks truth to power.

In this noisily opinionated and divisive Woke Era, Ruga invokes the genuine and complex radicalism championed by MCQP – which compels us to rethink binaries and grasp the rich complexity of queerness. As gender theorist Judith Butler reminds us, as an attitude queerness must be twisted, and further queered if it is to grasp its ‘expanding purposes’. Because Queerness – undomesticated – is the sum of “democratising contestations that have and will redraw the contours of the movement in ways that can never be fully anticipated in advance”.[2]

Herein lies Ruga’s wit and genius. As an artist he does not carve out a territory but expands it. The current two works (lots 24 & 25) examine religious (Christian) hagiography – the archetypal Mother and Child, with the artist standing in as the mother, in Imini Yomjojo (Judgement Day) (lot 24). Why not? If queerness is an attitude, isn’t this precisely Ruga’s whimsical yet deeply earnest strategy? Welded discs, like multiplied cold steel halos, twinned handcuffs, hurtle forwards and backward, a cop car is overturned. A tempest meets beatific composure, the whole a jarring yet gentle meld. The child the artist holds before us is the iconic figure of transcendence, the rest is chaos.

Invitation….Presentation….Induction (lot 25), the second tapestry – a material used by the Medieval Church to tell stories for the illiterate majority – focuses on early black resistance to colonization. The gay Dingaan’s gleaming rippling warriors hurl spears and hold up shields against a perplexing enemy – Ruga’s iconic vision of a Koonsian Camp Glam, a figure whose upper body and face is obscured by balloons, while the elongated sheer legs are capped with bling high heels.

We all know writer and cultural philosopher Susan Sontag’s famous definition of Camp taste – it “turns its back on the good-bad axis of ordinary aesthetic judgement. It doesn’t argue that the good is bad, or the bad is good” – precisely.[3] This is the point of all that Athi-Patra Ruga makes and does. His art embodies health in this dark age of bigotry.