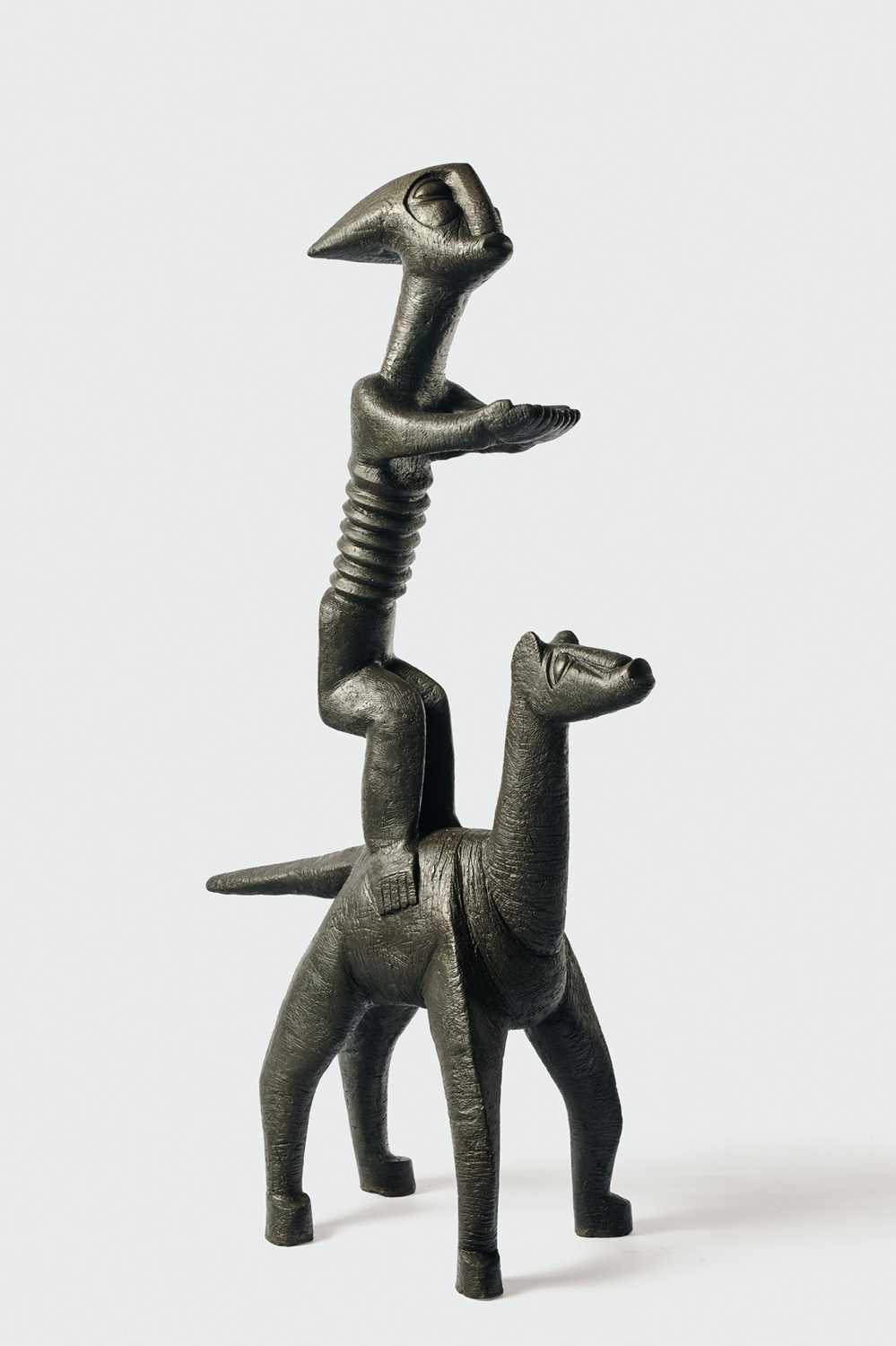 bronze on wooden base


The overall condition is excellent.

bronze on wooden base

Mythological Rider is a notable work among sculptor Sydney Kumalo’s compositions exploring the motif combining man and beast in a singular form. The work depicts a humanoid figure balancing on the back of an animal – perceptibly a long-necked hound.

The bronze sculpture is among the earliest known explorations of the idea. Kumalo made Mythological Rider, in 1970, and returned to the motif in 1975 with a work titled Two Bulls. The later piece comprised a bearded man riding a horned bellowing bull; his arms reach out in comparable fashion though his hands are clasped in a praying gesture. Kumalo also fashioned Man on Beast in 1975 and others followed over the years. He returned to the motif of a humanoid figure riding an animal throughout his career.

To gain a richer appreciation of Kumalo’s work in general and Mythological Rider in particular, one must delve into the world and culture that shaped his artistic imagination. Kumalo was born in Sophiatown, Johannesburg. Following the forced removals and the demolition of the area, his family moved to Diepkloof in Soweto.

Kumalo was raised with a deep awareness and pride in his family's Zulu traditions. However, it’s important to note the convergent cultural polyglot that greater Johannesburg was from the start; giving a growing Kumalo access to a slew of cultures and myths to draw from.

For instance, the strange anatomical features of the Mythological Rider, like the disc-shaped head and the accordion forms of its torso locate the figure as something ethereal and not human. We must look to the realm of tokoloshes or goblins of Zulu myths and folktales to appreciate its form. Khumalo had an artistic agenda to employ African sculptural traditions. A mode espoused by the Amadlozi group Kumalo founded in 1961 with fellow artists Cecil Skotnes and Ezrom Legae, amongst others. This universe of ideas is key to enjoying the power of his Mythological Rider as an artwork.

We know from an interview given by Neil Dundas of the Goodman Gallery that Kumalo made the terracotta of Mythological Rider in 1970 from which the bronze was cast. Only the first edition was ever cast with Kumalo at the Vignali Foundry; numbers two to seven were cast after his death. He had left the rights to Esther, his wife, to cast the full seven editions of the work, and wanted her to have his proof. The artist's proof was later sold by the gallery to the Commonwealth Development Corporation on behalf of Esther. His express wish that the proof of the sculpture be made for his wife tells us how much he loved the work.

The auction offers examples by great modernists as well as exciting contemporary pieces. Notable is a selection of work by George Pemba. There is also a set of impressive urban scenes and portraits by Gerard Sekoto, a rarely seen Alexis Preller, a glorious Robert Hodgins, and varied examples of Dumile Feni’s work. Within the contemporary offering, there are outstanding works by Blessing Ngobeni, Sam Nhlengethwa, William Kentridge, Teresa Firmino, Athi-Patra Ruga, Kudzanai Chiurai, Nelson Makamo, Owusu-Ankomah and Nicholas Hlobo.

Lots will be on view at the Xayiya residence: 63 4th Street, Houghton, Johannesburg
Saturday 23 October to Saturday 30 October from 10 am to 6 pm