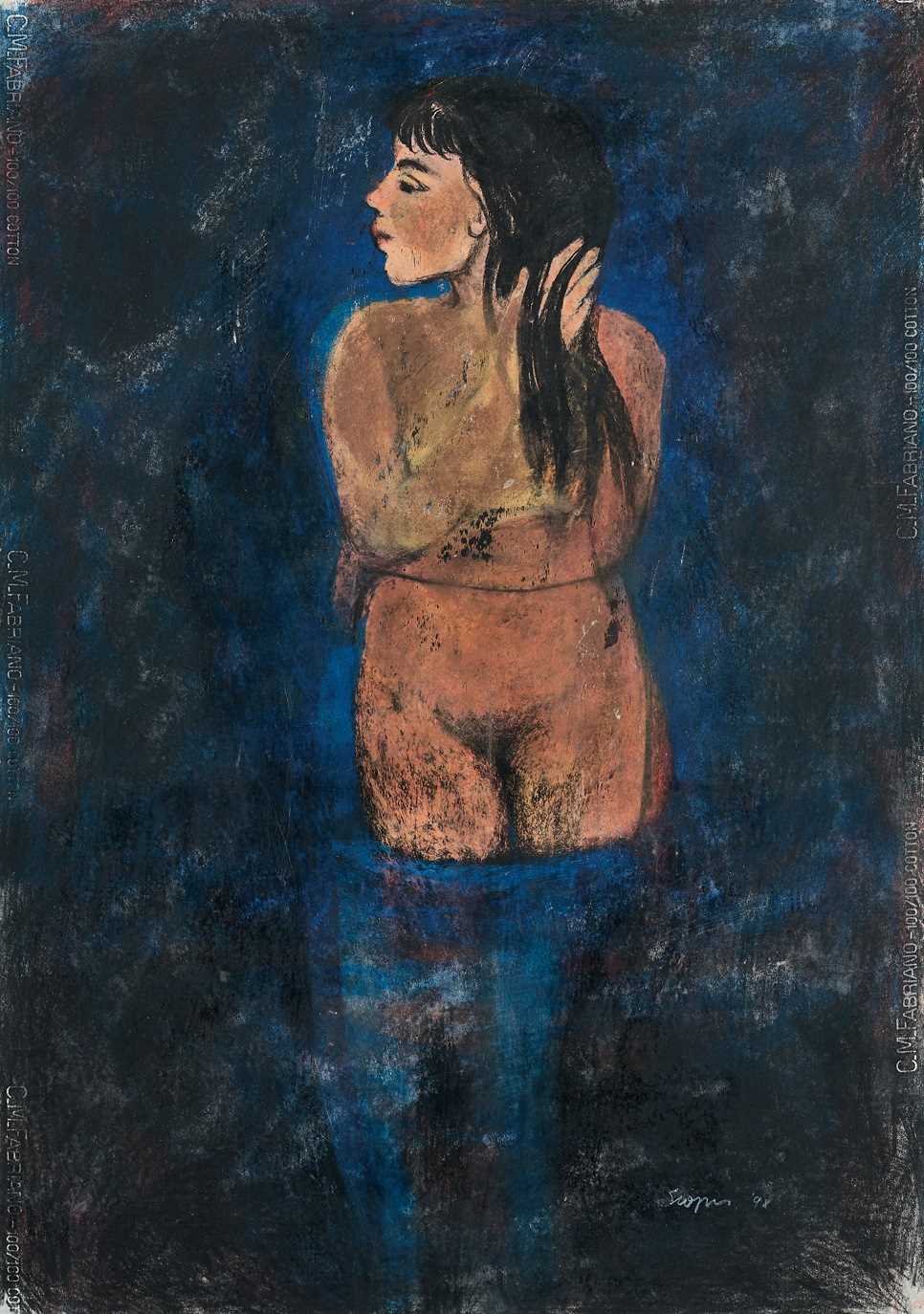 Frame has minor scratches and dents in areas. Professional restoration report upon request.

Created in the same year Penny Siopis presented her critically acclaimed solo exhibition Charmed Lives at Goodman Gallery in Johannesburg, this sensitively rendered drawing from 1998 stylistically references previous works from the artist’s ‘History Period’ such as Exempli Gratia (1989), and thematically prefigures some of her later works like Julia’s Friend (2007), and Spirit Matter (2016).

Penny Siopis’ work is marked by her interest in the physicality of her chosen medium, the accumulation of found objects, material memory, and the politics of the body. As an artist, and since the start of her career, she has also continually engaged with the shifting social and political situations in South Africa.

In this intimate, never-before seen drawing, the artist presents a nude female figure in frontal view, submerged in a vague and indistinct dark background. Her demeanour coy as her arms protectively fold across her chest, her face turned to the side while she strokes her hand through her long, loose hair. There is a sense of intimacy and personal closeness of experiences in the narratives of Siopis’ work, and with this drawing in particular, the viewer relates to the fragility of the subject. Siopis has had a longstanding interest in the poetics of vulnerability, and here a dialogue between history, associations of femininity, ‘the self’, private and public is at play.

The year after this drawing was made, Penny Siopis exhibited in La Memoire 99 at the Villa Medici in Rome alongside Christian Boltanski, Mary Kelly and Rem Koolhaas.

Early works by Siopis, especially from the 1990s, like this drawing, are scarce and highly sought after since they rarely come available to the market.

Penny Siopis recently exhibited in Plural Possibilities and the Female Body at the Henry Art Gallery, University of Washington (2021); Witness: Afro Perspectives from the Jorge M. Pérez Collection at El Espacio 23 in Miami (2020); Global(e) Resistance at the Centre Pompidou in Paris (2020); Blinde Winkel / Blind Corner at Rosa-Luxemburg-Platz in Germany (2020); Indian Ocean Current: Six Artistic Narratives at the McMullen Museum of Art, Boston College, (2020) and I Am ... Contemporary Women Artists of Africa at the Smithsonian National Museum of African Art in Washington DC, (2019).

In 2014/5, Penny Siopis’ major retrospective exhibition, Time and Again was presented at the Iziko South African National Gallery in Cape Town and later at the Wits Museum of Art in Johannesburg.