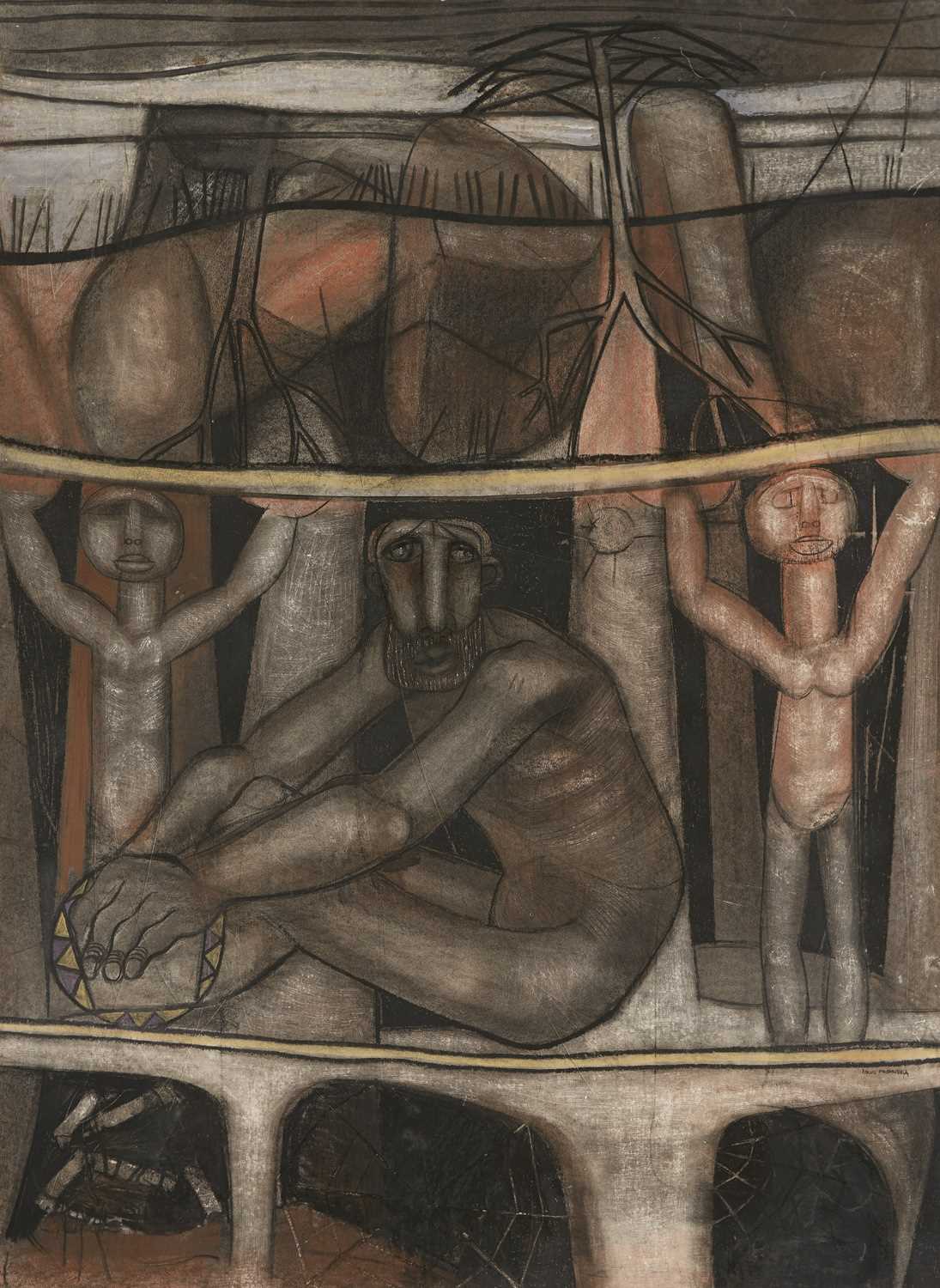 
Creasing, paper slightly oxidised, abrasions and staining along top margin, not laid down.

While at high school in Orlando, Soweto, Maqhubela joined Durant Sihlali’s weekend artist’s group and enrolled for classes at the Polly Street Art Centre, where he received tuition from Cecil Skotnes and Sydney Kumalo. The immediate commercial and critical success that followed can be attributed in part to the popularity of ‘Township Art’, but his early work was already distinguished by its vitality and high level of draughtsmanship.

In the mid-1960s Maqhubela explored his prodigious skills in a series of conté crayon drawings. Wood Collectors (Martin 2010, plate 13:43) was selected for an exhibition of African art at the Johannesburg Art Gallery in 1965. Other drawings that are stylistically comparable to Exiled King, such as The hunt (Aspire catalogue, Spring 16, lot 103: 212) and Fallen Kings, bear testimony to the way in which symbols and signs shifted his work beyond observation and social realism into the realm of surrealism and the concomitant evolution of a personal iconography.

Unsurprisingly, having left South Africa for Ibiza in 1973 and settled in London three years later, chiefly for political reasons, Maqhubela used his imagination to speak truth to power. In an email to the writer on 12 January 1973?, he described Fallen Kings as a depiction of “indigenous figures languishing in a cave, as representing the Rivonia trial group”, while the Exiled King “is incarcerated underground, with caryatides (our youngsters) holding the fort, awaiting his upward 'resurrection' – with the knowledge that submission would only lead to an even darker place – a permanent life in the 'dungeons, on the lower plane'”.

Exile King is a rare example of a brief phase in Maqhubela’s oeuvre, which is characterised by geometric sculptural volumes on the two-dimensional surface, and a sophisticated stylisation reminiscent of Sydney Kumalo, Fernand Léger and Henry Moore. The figures and structure are crowded into the claustrophobic space, and densely worked in a myriad of tonal values in sepia, grey and ochre conté crayon, with touches of venetian red; the forms are contained in solid black lines.

These drawings culminated in Peter’s Denial (Martin 2010, plate 14:44) with which Maqhubela won the overall ‘Artist of Fame and Promise’ Award in 1996 (not designated for black artists as was the norm; Stanley Pinker was runner-up), thereby becoming the first to cross the divide between black and white artists. His prize included a trip to Europe and the three months spent abroad transformed his life and work.

Martin, M. (2010). A Vigil of Departure – Louis Khehla Maqhubela, a retrospective 1960-2010. Johannesburg: Standard Bank Gallery. Marilyn is the work mentioned on any page or illustrated with figure or catalogue number?

The Inaugural Cape Auction offed a diverse range of top-quality historic, modern and contemporary works. With a focus on critically engaged art and a curated approach, seasoned and new collectors competed to acquire significant works.