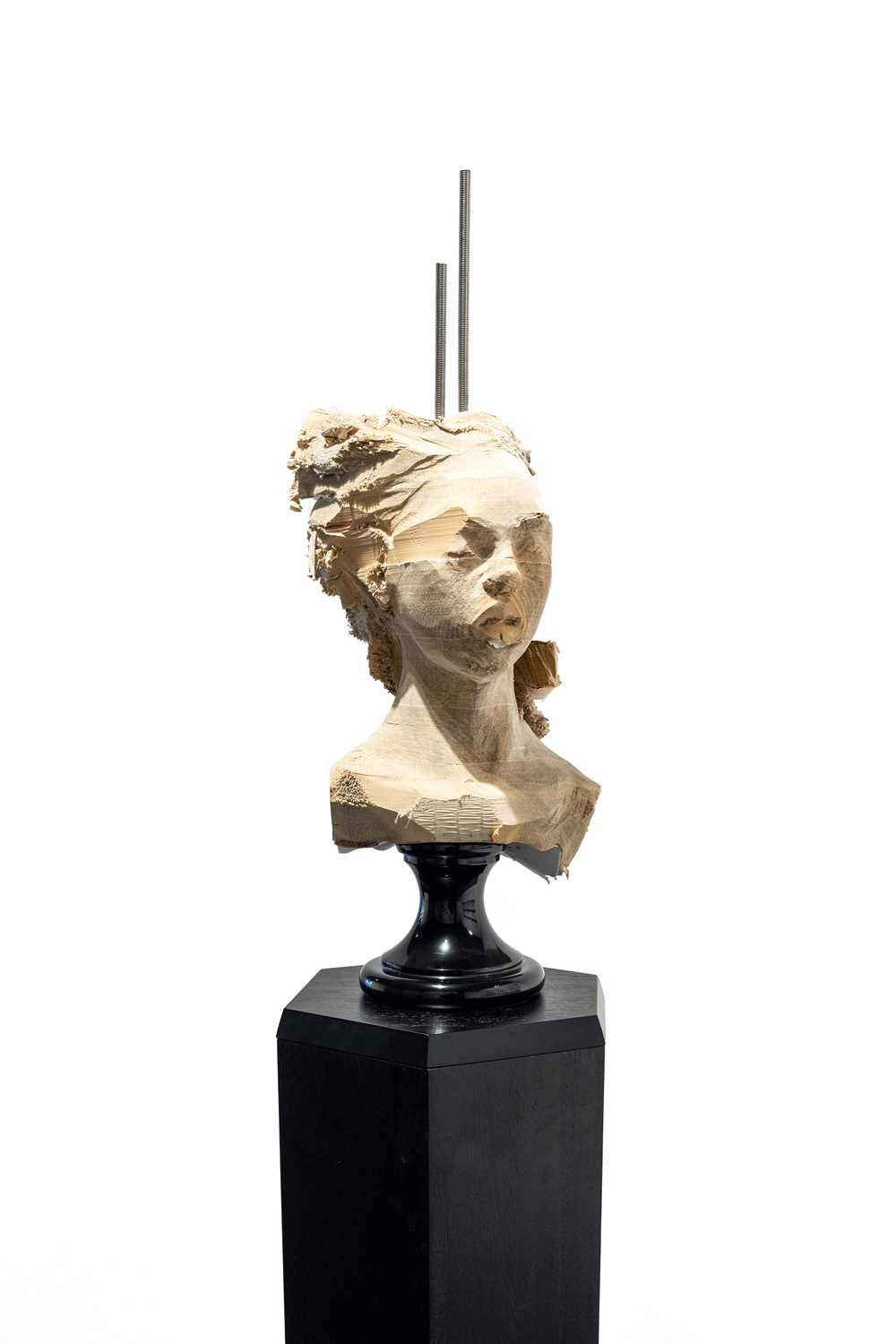 
The overall condition is excellent.

Made of bonded and retrofitted legal statutes from the apartheid era, Wim Botha’s Untitled (Witness series 21) is a twin-pronged commentary on Roman Law and its abuse under apartheid. Concerned with succession, contractual obligation, and property, this law, during the colonial and apartheid era, patently rejected the rights of a black majority – perceived as slaves, and thus as property – the summation of this miscarriage of justice none other than the 1913 Natives Land Act which assigned 90% of South Africa’s land mass to a white minority.

Botha’s sculpture does not present this injustice as manifest content, rather, he compels us to reflect upon the burden of history. The use of legal statutes is by no means innocent or accidental. Combining two creative modes – arte povera and classicism, the found object and the archetype – Botha reveals the precarity of classicism and the uncanny durability of pulped matter. The tension in Botha’s sculpture lies within this very finely balanced counterpoint – a counterpoint most famously articulated in his 2004 Mieliepap Pietà, a life-size replica of Michelangelo’s Pietà modelled from maize meal.

A phrase, used in building construction, which defines Botha’s ‘Witness Series’ is tensile stress – as this is the purpose of the steel rods used to ramify reinforced cement, in order to contain the forces which threaten a building’s infrastructure. Their role in Botha’s sculpture is as functional as it is metaphorical, for what the artist reminds us of, when looking at this series, is that tensile stress is inescapable – it defines the work’s dynamism, and its built-in anxiety.

To see Botha’s Untitled (Witness series 21) as a total work, is to recognise its ingenious complexity. A battle with the law, with the archetypal, and with the precarity of all ripostes to absolutes, it is a sculpture which allows for dynamic thought and feeling. No mere object, arraigned upon a plinth, this work, as a witness, operates as a silent corrective. Its instability is more compelling than its sentient stolidity. Botha is careful to maintain the spines of the juridical books used in this series – they are the works tell. Shaving the ramified block of books, as one would a tree trunk, or block of marble, Botha reminds us that waste is an integral part of consumption, that remaindered books possess very different uses – they need not wind up in dead letter zones – and that art, through perpetual experiment, is nothing if not demanding and challenging.

Wim Botha’s muscularity of mind and hand prevails. This work is archetypal in the artist’s oeuvre, not only because of its hyper-reflexive use of material, but because of the acuity of their deployment.